The Telepoem Booth at The Makery! 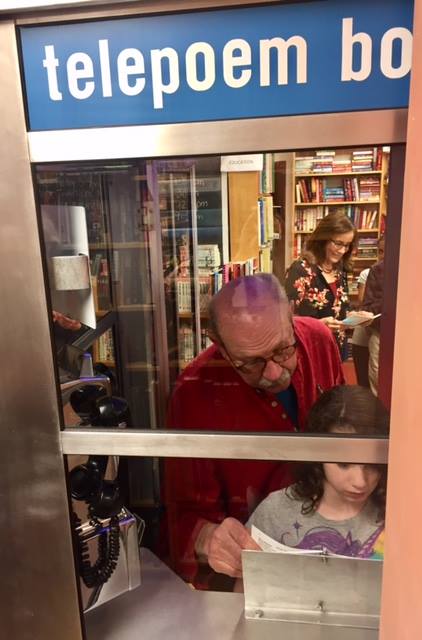 The Telepoem Booth now at The Makery!

Quoting from the StateCollege.com article:

The TelePoem Booth is the first of its kind in State College and is located at Webster’s Bookstore Café, 133 E. Beaver Ave. The interactive art display was the brainchild of artist and writer, Elizabeth Hellstern, who was on-hand for the ribbon-cutting ceremony on Friday evening. Hellstern’s first TelePoem Booth is located in Flagstaff, Ariz., where retired art teacher and State College resident John Ziegler John Ziegler originally saw it and fell in poetic love with it.

Upon returning to Centre County, he immediately set his mind to establishing a TelePoem Booth in the area. Hellstern’s second booth is now owned by the Art Alliance of Central Pennsylvania and was funded through a Knight Foundation Donor-Advised Fund that is held and managed at Centre Foundation.

“This is such a fun and unique project,” said Molly Kunkel, executive director of Centre Foundation. “We’re happy to facilitate the funding for the TelePoem Booth, which will enhance our community for years to come.”

A committee of local poetry enthusiasts, including Ziegler, Sarah Russell, Steve Deutsch, Katie Bode-Lang, and Mary McGuire, worked over the winter months to comb through poetry submissions for the booth. Now, members of the public can dial-up and listen to 167 poems by 75 local poets, as well as other poems that are publicly available and some from the original Flagstaff booth.

“The Telepoem Booth is a unique way to bring poems to people’s daily lives,” said Ziegler. “We have classic and modern poems, as well as the work of our local poets – all available by dialing a rotary phone in an old-fashioned phone booth and hearing a poem read by a poet.”

There are even some unlisted poems, which add to the intrigue of the TelePoem Booth. Hellstern recommends random-digit dialing to try to access these poems. She also hints that dialing “0” will not disappoint the listener.